I’m not sure if there’s such a thing as the ‘perfect roommate’, but I think I happen to live with the most ‘perfect looking roommate’ around.

Waking up to Oliver in the morning is one thing, but I also happen to live with one of the raddest chics I know; my dear friend Montana Cox, aka Monty aka Grommy.

Monty is one of those mysterious creatures that, from a distance, is so graceful and elegant, yet once you get to know her, up close – she is this super goofy, clumsy tomboy who everyone just adores. I can’t actually pinpoint when we met for the first time, but it’s been a long and ever-growing love story between the two of us.

Often people will ask Monty: “what’s it like to live with a married couple?” Those who are close to us usually answer for her… “You should ask Oli?”

We are two peas in a mixed match pod: Ren & Stimpy, the movie ‘Twins’ and any other reference that outlines that we are the same same but different.

There is something confusing about living with someone so perfect looking… who on regular occasions will stroll out of bed, G-string and all, then walk to the fridge and chug and two litre bottle of Gatorade in one gulp before 8am. If there was ever a way to truly get to know someone and how well balanced and crazy the life of a supermodel is, it’s by living with Montana.

Montana first started her career as the winner of Australia’s Next Top Model, but for those in the industry it was plain to see from episode one, that this girl was going to be BIG. It was a no brainer.

Monty’s career propelled the moment she got off the show, with the industry literally cat fighting over who would get a piece of her first. In no time at all, she was a full blown household name, covering every magazine under the sun; Vogue, Harper’s, Grazia, you name it.

She became an ambassador for massive Aussie department store David Jones, a title most girls can only dream about, and it was hard to turn your head without seeing her in designers’ store windows or ad campaigns.

With brands like Josh Goot, Camilla & Marc and Lover showcasing their pieces on Monty, it was only a matter of time before she up and left for The Big Apple and rose to the next level of model stardom; walking the runways of Chanel, Givenchy, Lanvin and D&G…. She really has reached the top of the model game. 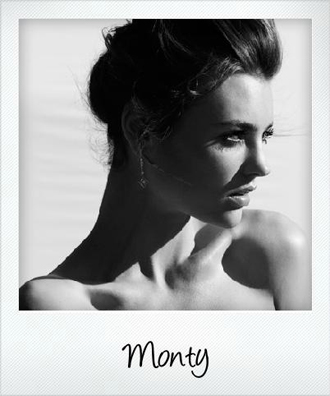