Where the bloody hell isn’t she! That’s my question.

This wonder woman is so hard to keep track of as a friend, that it’s almost easier just to Google where in the world she is, or read the local newspaper.

Lara and I have known one another for what almost seems like a decade. We connected officially one night when I first moved to New York and she was here with a mutual friend. One glass of wine in and the two of us realized we shared a love of all things beautiful… and expensive.

Lara is the epitome of a power woman. She is self made, and one of the most inspirational women to many young Aussie girls.

To say she is a model is a serious understatement. This pocket rocket has a long resume of impressive and successful titles, from being a brand ambassador, to a businesswoman, fashion designer and television personality, Lara has very few life boxes yet to tick off. She has done it all and done it well.

She stands up for what she believes in and is a true romantic at heart, which is something we can both sit and talk about for hours. No matter where in the world we both are, when we cross paths we always find time for each other. She is an inspiration to me, more than anyone. 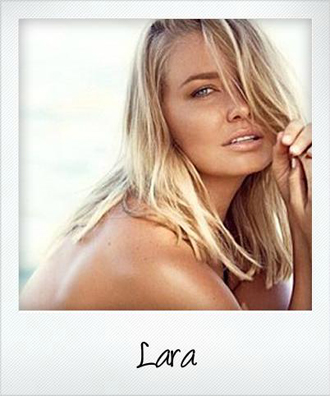