There are models, and then there are supermodels. It’s hard to distinguish the difference between the two, but in my mind, a supermodel is not someone who has excelled on the international map, it’s a model who is successful in more areas than just striking a pose. They can do everything, hence the super power ability of being a supermodel.

Which brings me to Miss Cheyenne Tozzi.

A women of many talents, this super woman is not only one of the God-damned most flawlessly beautiful women I have the pleasure of having in my life, she is a singer, songwriter, TV star and all time legend to hang with. The energy that this superwoman carries with her on a daily basis is exhaustingly amazing. I don’t know how she does it, but she is so charismatic and consistently happy, it’s no wonder she is such a global success.

Chey and I met because our partners Oli and Tys, have been friends for years and have the sweetest bromance around. When people ask us how we met, we actually say that our boyfriends “used to date”.

Chey is my ultimate wing woman and we have had some incredibly fun times together. She sang at my wedding and we have caused trouble at many points and places around the world.

This super lady has been working successfully as a model for over 10 years now, hitting every country known to man. She spent seven years working in New York, and now rarely finds a moment to sit still in between countries, with her role as a mentor, alongside Naomi Campbell, on The Face Australia, as well as writing music in Chicago, as the lead singer and song writer of Van Hoorn. Every time I speak to her, she’s at some airport on the way to South Africa, Spain, or Barcelona… It’s hard to keep up with this lady at the best of times. And it is no surprise to know that Chey comes from a long line of beautiful and successful women. Both her mother, aunty and sister are all globally recognized for their contributions to the modeling world, and in the moments she has free, Chey spends every second she has with her family and Nona.

She really is a superwoman. Introducing my mate, Cheyenne Tozzi.

See Cheyenne in an editorial for One Teaspoon here 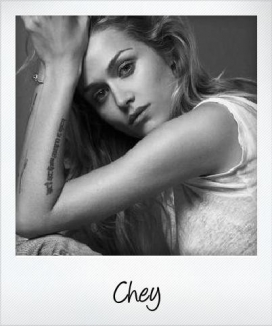