Cat and I met years ago through a series of common friends and shared watering holes. We have had many late nights and/or the quiet wine. After the journey we’ve had in our careers, we both find ourselves living a million miles from home and three blocks down the road from each other, in Brooklyn.
More than anything, we have a shared loved for our puppy dogs; something we will always connect on, above all things in our busy lives.

Cat is an Australia model icon, and absolute bloody legend. Discovered at the age of 13, through a small modeling competition, she was immediately branded as ‘the one to watch’. This frequently used statement was almost bowled over by the monumental craze that soon stirred after her discovery. Finding her way into the pocket of photography legend Mario Testino, who literally claimed her after first meeting to sign up for a six month editorial exclusive. Cat has graced the cover of Vogue Australia four times, featured in Terry Richardson’s infamous Pirelli calendar and appeared as the face of some fairly recognizable design houses such as D&G, Hugo Boss, Versace, Donna Karan, Louis Vuitton, Dior Joaillerie and Narcisco Rodriguez Fragrance. Quite a resume, some would say.

But behind all the flash photos and chiseled cheekbones, Cat is just a genuinely soft soul who is a delight to hang with. She is a lover before anything, and anyone who has had the pleasure of working with her understands and admires her success – because she deserves it more than most. 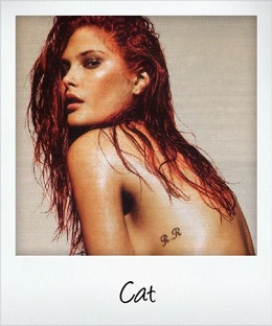