Picture this: it’s summer in New York, people come and go from the scene, they party and talk “business”, share a bottle of rosé in the sun and then go back to work and forget the weekend ever happened. It’s New York life and you start to get used to it after a while. However, one weekend, this little human came into my world and it changed me in more ways than you can imagine.

Oliver and I generally spend the summer in Montauk, NY, up in the Hamptons. One weekend, we got a call from a close friend saying he was in town and he and his girlfriend would love to come and spend the weekend with us. Now, if you haven’t realized it by now, I am a not normally the most welcoming to female friends, at first glance. Coming from a group of male friends who are notorious modelizers, I am always skeptical about meeting the boys’ ‘girls’, and sadly, I often didn’t even waste my time learning their names, as they were a fleeting part of their lives. Terrible, I know, but true.

However, when this little pixie arrived at our place, I was in awe. I knew my friend was dating a big name model, but that was about all I knew. I was fascinated. Anja looked at me, with this tiny little frame, 5’4 and she was just luminous. From the moment she began to talk, she was open, friendly and as humble as anyone I had ever met. I don’t think she mentioned once to me that she modeled or worked in the same industry, she genuinely wasn’t fazed by any of it, and we connected almost instantly, just on that alone.

I personally stand a mere 5’1, and have often dreamt of being just that little bit taller and leaner if I was stretched out, but after meeting Anja, she suddenly made me feel like I was on the winning team.

Anja has covered hundreds of huge publications and been the face of major campaigns like French Connection, The Kooples and Urban Outfitters, giving hope to thousands of girls around the world that anyone can be a model, and not just model, but be internationally successful and recognized. She truly is an inspiration, and someone I can honestly call a special friend.

See our interview with Anja here 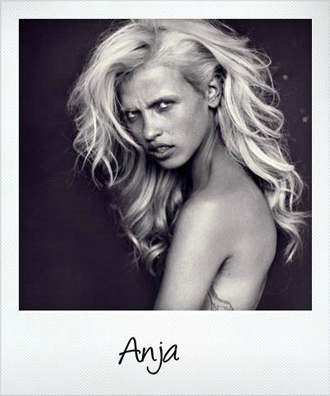