Director. That’s his job.
Brother. That’s a full time gig for him.

Sometimes I used to feel a little bad for Oli as having to deal with a wife like me can be a little intense at times. I would describe myself as a hybrid of ADD mixed with OCD infused with energy, passion and an irrational, spontaneous nature. I can’t sit still at the best of times, and generally when I am relaxing my brain is still running a million miles per second. So, when Dean finally moved to New York, he became a diffusion for Oli, in the sense that I got to spread my energy and nagging over two men, and Oli got to have some boy time. Problem solved.

Dean, if I haven’t explained it yet, is my younger brother. We are similar in many ways, but he is definitely a whole different and dynamic person in his own right. I would often refer to him as the muse behind the movie ‘My Idiot Brother,’ but for all the opposite reasons to what the title suggests. He basically has a positive approach to everything, never has a bad word to say about anyone, and will cover his ears if someone else does. He is trusting, kind natured and one of those people I would rely on as an emergency contact in the middle of the night, no questions asked. A perfect example of this was the night of our wedding rehearsal dinner. While everyone was soaking up the liquor and heading out to the next spot, we caught Dean quietly in the back of the kitchen, collecting the leftovers to take to a homeless shelter. Yup, that’s just his nature.

He is more than just a brother, he and Oliver are best friends, he is now by business partner and just recently he also performed the role of celebrant at my wedding. He legally married Oli and I in front of our family and friends only a few months ago here in NY. Quite the multi-tasker.

I pitched the idea of All My Friends Are Models to Dean a few months back and he came on board full force, without hesitation, taking on the role of managing director. Working for massive music moguls like The Bowery Presents, and most recently at Media Planet, his experience with major publishing houses and media involvement came second nature to him. Dean is now the driving force behind the connecting companies, sales and the nitty gritty of the entire business end of the website. He is also the voice of reason when I start to get ahead of myself and try to do too many things at once.

So, if you have any complaints, issues or queries about the site, please feel free to bother him. I’m kidding. But really. 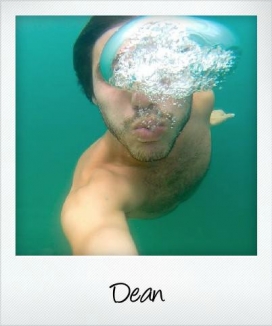