Sixteen is a scary age. Especially when you just quit a sport that was going to take you to an Ivy League and no longer enjoy your rigoring classes. But, to put it in the cliché-est of terms, Alex followed her heart.

With a height and build that seemed “model worthy,” and an interest in the fashion industry Alex signed with a local modeling agency. She quickly started doing shoots in the cities and even walked her first runway. And, as you can imagine, she had a lot of stories to tell.

We see what happens in front of the camera, but what about behind? It’s not likely that everyone gets backstage passes during Fashion Week. Luckily Alex has one of the best passes.

Being a model is one of the most true perspectives to a fashion event, because they’re the ones on that runway and getting a look at designers when the cameras aren’t around.

Around the same time Alex started getting really into modeling, she became one of the editors for her school paper. She was taking her love for writing to new heights. These new perspectives as a young journalist and model gave her an idea: Phresh Off the Runway.

In January, Alex started a blog where she took all of her behind-the-lens stories and her fabulous editing skills and gave it to the world. After a month of writing truthful stories of the modeling industry, she discovered All My Friends Are Models. It was everything she was doing on POTR, and more.

Months later and Alex is now apart of the AMFAM family with control of the sacred Instagram and the Currently Obsessed page. Both true honors and dreams come true. 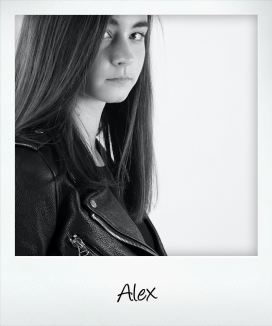