I don’t think Nate actually knew what he was stepping into when he first signed up for the AMFAM team.

With experience in Fashion & Mechanical Engineering, his first thought was that he would come in and play around with the website, helping with the design and structure. I think he was originally drawn to the idea of working with models, which most of our team are, but then I came along and threw him into a whirlpool of so much more, and he took the challenge on like an absolute boss!

Nate has literally been the guardian angel that most companies look for. He handled each task we threw at him which such a cool energy while doing so, rocking up each day with a skateboard in hand and then casually ticking the boxes each day of my never-ending to-do lists. He went above and beyond our expectations on every single task. From graphically designing the layout, assisting on the models shoots, (which he seemed quite pleased to be involved in), to editing our logo, creating our business cards, managing the editorial content layout & some exciting projects which we plan to launch in the upcoming issues.

Born in Portland Oregon, Nate originally founded BLOCK XXIV an art collective with videographer Matt Ching. Learning all the tricks of the trade from his dad, he has been painting & illustrating since the mere age of 5. He also designed Lost Lander Tour Tees & is self-taught at silk-screen printing.

With a history of travelling the world, you can see where he gets his creative mindset. He thinks on a global scale with every project he approaches. He literally threw himself into the website with the same motivation and dedication as we did, which really helped make the whole process manageable and achievable.

We could not have managed this with out him. Nate Decarlo ladies. Not just a pretty face. 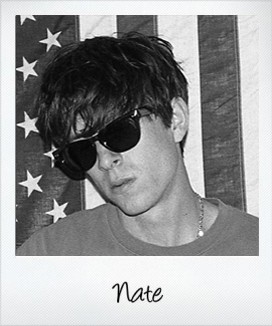