Another Perth based beauty whom I have know for years and years, Amy Finlayson started modeling at the mere age of 14, and is one of the bravest to come out of the industry. She moved to New York City in 2007 and returned home to Australia in 2010.

Amy’s ledger of magazine credits includes Australian Vogue and Harpers BAZAAR, Oyster, RUSSH and many other big name titles. She made her catwalk debut in 2004 and has since appeared on the runway for local designers such as Scanlan & Theodore, Ksubi, Alex Perry, Alice McCall, Lisa Ho, Camilla and Marc and many more.

Amy has worked with many of the world best photographers such as Steven Meisel, David Sims, Steven Klein, Richard Bush, Nick Knight, Dan Jackson and Alexi Lubomirski. She’s worked solidly since her return to Australia and is juggling a busy modeling schedule with finishing a Visual Culture degree at university and working weekends at an art gallery in Sydney’s Eastern suburbs.

Another model of many talents, she writes for us regularly in the ‘Models Write’ category, and just had her first exhibition with Mick Bruzzese at Luxe Studios in Darlinghurst, which was a great success.

We are very lucky to be able to read the wise words of such a darling. Miss Finlayson. 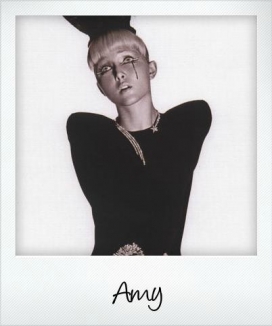