Before there were hipsters and everyone was photographer – there was B-rad.

He was that extremely tall, effortlessly cool kid in Bondi that everyone knew and he would always just be knocking off work to go drink with the local babes. He was rad. And he was Brad. Hence B-rad.

Ten years down the lane, here we both are, living the dream and working side by side with a bunch of our perfectly perfect model friends.

Brad Triffitt – an Australian fashion photographer who began his career in fashion as a design student at the highly regarded Australian Fashion Design Studio in Sydney.

“It was flicking through the pages of Vogue in class that I discovered the art of fashion photography and decided that maybe this was the direction I wanted to go in,” he says.

After graduating from the Fashion Design Studio in 2006, Brad moved into the photography world assisting some of Australia’s top fashion photographers, before moving to New York in 2010 to shoot professionally. Brad’s love of photography and his trained eye in fashion have together made him one of the top young photographers working in the industry today.

You will see Brad and I working together in a series of saucy shoots with the girls in bathtubs and a decent amount of nipple in an ongoing, well known project called FREETHENIPPLE. Watch this space. 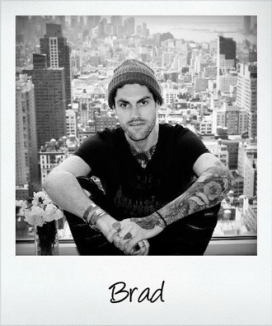